A seed
set on the wind
remains forever
only possibility
without Earth,
Water, and
Celestial Fire

I, Ben, might be moving to Copenhagen…People in Minnesota have often confused me as being from one of these Scandinavian countries because of some sort of “accent” they hear on my voice. About a year ago a women was so convinced that I was actually from Denmark that she simply refused to accept that I was from Iowa. Also, the past few winters, I have attempted to adopt the Danish concept of “Hygge” into my daily life. More on that soon. I take these all as signs that maybe Denmark has been calling all these years…Don’t worry Mom, I don’t really think it’ll happen 😉

After hopping off the train from Lauenburg, we stepped onto the streets and realized that they have a different idea of what streets should be. Instead of road and sidewalk, they have an automotive road, a bike road, then a sidewalk. As a result, over 50% of all residents bike to work and use bikes as their primary mode of transportation! It’s a city whose busy streets are not cluttered with honking horns, but smiling faces on bicycles with baskets.

On top of that we’ve come to learn that employees have a minimum 5 weeks vacation (many employers offer and encourage more), 12-month maternity leave, universal health care, free higher education, a vocational education path, 3 years of free Danish classes if immigrating, “night ravens” (locals who volunteer on weekends to help make sure people get home safely), and many more things that this staunch Bernie supporter swooned over. Also, simple things we’ve noticed reflect an embrace of ideas of cooperation and conservation. For example, we saw a relatively new brick wall built along a park. A thick tree branch jutted out in a way that would disrupt the wall. Instead of cutting out the branch or entire tree as one would expect, a fenced portion of the wall was built that allowed room for the tree branch to continue to grow while maintaining an effective wall. Brilliant! And last but not least, a concept that eludes direct translation, “Hygge.” It is pronounced something like “HUE-gah.”

The closest translation is “cozy” but it carries with it more than just physical comforts. It can be used as a noun, a verb, or an adjective. One brief definition I’ve read says, “A fundamental quality of Danish culture, Hygge cannot be translated using a single word. Rather, it includes many of the pleasures we associate with everyday living – relaxing with friends, enjoying good food, and creating a cozy evening by lighting a candle or two.” For a more extended read on the idea, check this article out.

We enjoyed a night of Hygge during our last night in Lauenburg. Many families gathered for about 30 minutes of music then enjoyed the back patio together until bed time for the kiddos. So, in the spirit of Hygge, we invite you to casually join us on the back patio for our full performance at the Jugendherberge in Lauenburg. Maybe grab a glass of wine, a cup of coffee or tea, a loved one, light some candles, and take a moment to slow down and enjoy togetherness and music. Mark Landson, we’d like to dedicate this one to you!

In Copenhagen, after a day venturing through the cemetery where Hans Christian Andersen and Soren Kierkegaard are buried, we met up with an old friend of Baylen’s, Alex Murray. She currently lives in Copenhagen and showed us some great spots about town. We played some music after dark on the main canal and then headed off to a bar that was so Hygge. Here is a video from the cemetery dedicated to Sarah Richardson and then one from the main canal dedicated to Matt Latchaw. Enjoy!

Candlelight, homemade snickerdoodles, a drink, old friends and new, a carpenter’s bench for a table, and old, worn chairs. Here’s to Hygge!

Victims and
Villains
Of complexity,
We grasp for
Power but
Bemoan the
Burden of
Shouldering
All these
Batteries.

Tangled webs of
Copper
And plastic,
Ropes to harness
Our collective
Wisdom,
Sometimes
Make a noose
Make a leash.

You are unique.
You are interesting.
And
You are drowning
In a sea
Of precious
Voices.

Saffron rice
On golden
Microchips
If that is
Heaven
Then
Congratulations,
Hallelujah,
Glory be to…
Something.

Our adventures in Berlin ended a few days ago. We enjoyed our stay and enjoyed the vibe of that friendly urban landscape. Now we are holed up in a more rural part of Germany. Lauenberg it is called, a town of 10,000 on the north side of the river Elbe. We are south and east of Hamburg. The landscape is beautiful and the quiet nights are even better. We’ve been compiling videos and filming documentary interviews. It’s a chance to catch up on everything we’ve put off until now. Today we even went on a jog along the river! Exercise? Are we allowed to do that on vacation?? I hope so.

I’ll mention two more things about Berlin. First, there was the night we went out to a dive called Hangar 49. As the name suggests, the bar is a refurbished air hangar. It was only possible to find via the magic of Google maps, because it was tucked behind several tall buildings and didn’t even sport a sign on the door. We’d been told there was an open-stage/open-mic once a week. We were hoping for something experimental, maybe art music or an acoustic jam. What we found was a dark, tiny stage packed with electric guitars cranked up to 11. 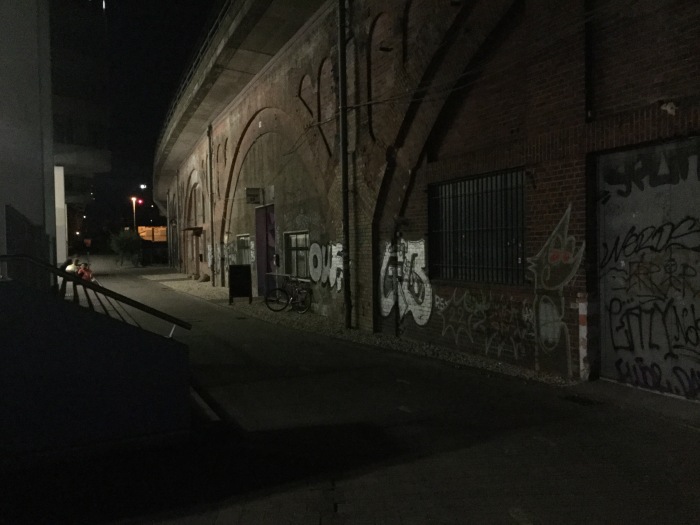 The good news is that we stuck it out. Ben and I both appreciate a good blues jam, and these musicians were having a great time on stage. Players would frequently tap each other out to join with a new idea, and the energy was comfortable, sometimes even comical. We had a couple whiskeys and watched things unfold for a while, then I shot Ben a quizzical glance and he shrugged approval. I got up and found the sound guy to ask his recommendation. He spoke great English and he was clearly excited when I mentioned a cello and viola. He went into the back room and returned a moment later with a clip-on mic.

So Wormwood joined the fray. We squeezed on stage and jammed as best we could with the plethora of bass, drums, and guitar that filled the room. No one could hear us, but that’s nothing new for string players like ourselves. When we got down to take a break, a local guitarist came up to Ben and said, “You should take the stage! We coudln’t hear you at all. Just be kind of aggressive. Tell people you want to do something.”

We waited in the wings for a few minutes, then we gave it our midwestern-best. With some smiling gestures and phrases like “just cello and viola for a bit” we got most of the players to step down. A drummer and a guitarist didn’t understand exactly or didn’t hear so we were left with an interesting four-piece band. The first things we tried was some kind of groove, with lots of guitar. A singer joined us halfway through, improvising lyrics and melody. People really liked it, and the guitarist turned down his amp to allow more strings through. Afterwards, I said to him, “Something experimental?” He started playing Metallica. I said, “Good enough!”

We started playing Nothing Else Matters, or an approximation of it, and then a woman sitting in the bar got up on stage and added the lyrics! She had a great voice. We jammed with her for a few tunes and then stepped off stage with big smiles. It was so refreshing to play music with others. It really didn’t matter what tunes or styles came up. Playing cello and viola that wasn’t signature “Wormwood” was a breath of fresh air for our ears. Thanks, Hangar 49! Thanks, Berlin!

The last thing we did before departing the city was make a day trip out to the lakes. There are many lakes west of the city. It’s about an hour transit to any of them (unless you are us, in which case you should plan for two hours at least.) We met up with Amanda, our new friend from Prague, and traveled together for the day. She had wandered into Berlin on her own a few days before. We joked and talked our way from train to train to bus to walking trail, and eventually found the beach we wanted.

A quick dip followed by a picnic revived us after our (much too arduous) journey, and we strolled up a path to uncover…wait for it…a column! These are very rare in…no wait…these are all over Europe. But this one was stone and it had a shield on it and it looked sort of Viking (in a Germanic, Christian kind of way)!

So we played a little music while the sun set on the river and we thought about home. This set is dedicated to Brett Baldauf. The music has a clearly recognizable influence. We gotta hand it to the Irish – they know how to write a tune. Hope you like it, Brett!

On our way home Ben started ranting about the sensationalism of Facebook and the curated lives we display to the public. He eventually decided that he must turn his Facebook profile into a celebration of the mundane and un-filtered. He feels it is the only way to fight back against the constant one-up-man-ship of the internet. (Besides shutting his FB down completely of course…but he tells himself he can’t do that because he’s a musician and entrepreneur who relies on just that sensationalism *facepalm*)

Without further ado, I give you Ben’s mundane dinner conversation video. His latest achievement in the celebration of non-achievement.