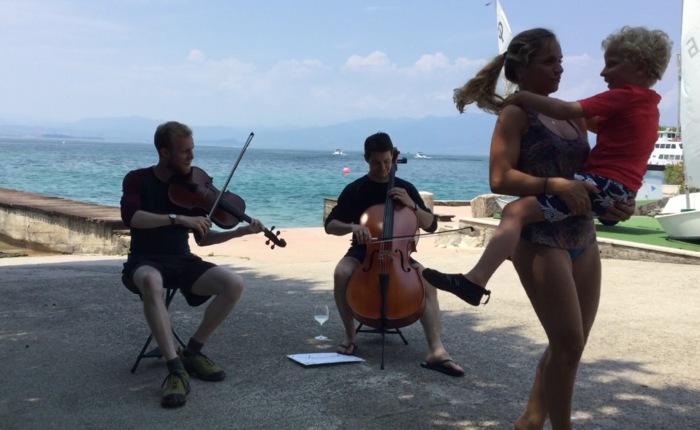 Flying in the face
of shy and
stranger
these friends extended
a rope to us
and we climbed aboard.

In body we spent
the day on the waves,
in mind we swam
amid the disorder
of mistranslations
and delightful queries.

Smiles
were the only
life-preserve
that counted.

Yesterday Wormwood had a hearty breakfast of fruit and bread with bread and cheese and more toasted bread #Italy and then set out to play some music. We recorded a set in the grass beside a harbor at the center of town. We then walked up the coastline of Garda Lake and found a picturesque walkway to make a video for our friend Brian Lenz.

As we played, Baylen noticed small groups of children and adults gathering across the channel. They seemed intrigued, but he thought nothing of it until three young people approached in a small motor-raft. At first, they tried to greet us in Italian. NOPE! We quickly offered our eight-word vocabulary to indicate that we only speak English. The lead young man, who we later came to know as Umberto, did his best. “I like your playing. Have lunch with us? Pasta for some music?” Ben and I exchanged a quick look that said, “Sure! Why not?!” and we hopped into the small raft, instruments and all.

Lunch was a mushroom rotini and a fresh peach. We were even offered beer and wine, which we eventually accepted on the persistent generosity of Chicco. Come to find out that he and Donatella manage a sailing school. The host of multi-age Italians that greeted us were students or assistant teachers at the summer school. Some spoke broken English and many spoke none at all. It was the kind of hospitality we both had secretly hoped to encounter through our music.

After lunch and a round of wine, we set up near the lakeside and played a private Wormwood concert for everyone. Smiles were big and there was even some dancing. It’s good we didn’t have to try and explain our lyrics 😛

The hospitality didn’t end there! Soon we got invited to go out in a sailboat and attend a birthday barbecue in the evening. We accepted on both accounts. Ben quickly donned three coats of sunscreen and we set out on the water. There was not much wind so the experience was relaxing and without a risk of capsizing. We even got a chance to try the rudder! Keeping conversation was a group dance. Some words were missed, but through their knowledge of English and our limited skills in Spanish, cognates were located and most questions answered. The important thing was humor and facial expression.

Later that night, we met up with some of the teaching assistants and walked to a nearby home. One young lady was turning seventeen and her friends were convinced that our music would make a perfect gift. We were excited to see the non-tourist side of Peschiera del Garda and eat home-cooked food. Guess what?!?! No pasta or bread! The main course was a rice casserole with meats and vegetables. This gave us the perfect opportunity to spread the gospel of the Minnesota tater-tot hotdish. Google was critical to that endeavor. We played a few sets and Baylen even busted out some solo Bach on Felicity the Cello by request. When the sun set, we bid our young friends goodbye and thanked them for their spontaneous hospitality.

To all those that were there that day, thank you for your generosity of spirit and for showing us a different side of Italy! 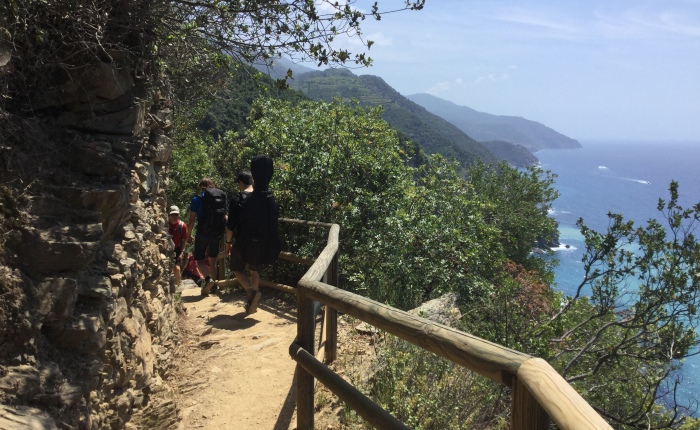 We’ve been making a lot of music and meeting a lot of people these past couple of weeks. This hasn’t left us a lot of time for getting all of our shout-out videos uploaded. So, here are 6 performances dedicated to 6 wonderful people that helped us out during our IndieGogo campaign!

Tom Alane – This video was taken during our night in Turin. Cheers!

Bonnie Anderson – This performance was from our favorite busking stairwell in Edinburgh.

Andrew Burgdorf – From Queen Mary’s Gardens in London to Buffalo, MN. Here’s to you!

Aaron Lockridge – Taken during our cello/viola hike on the Cinque Terre in Italy.

Kleinman Family – Near the harbor at Peschiera Del Garda, we sat down to play a set for you. You’ll see a charming young family from Bruges, Belgium enjoying the music and the day.

Brian Lenz – Here are the whitest thighs you’ll ever see at the edge of the lake at Peschiera Del Garda, Italy. 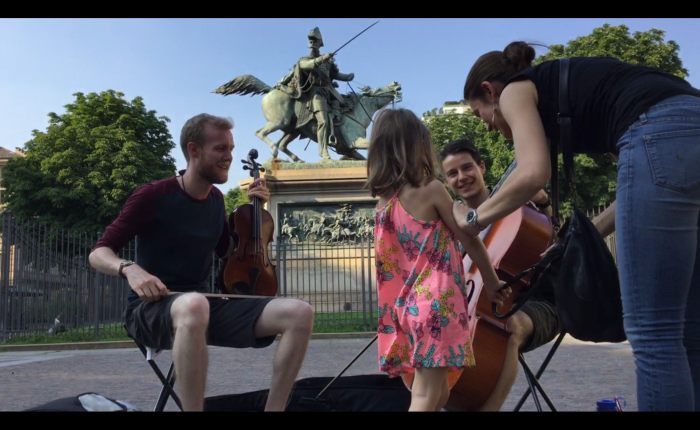 I sing
melody meets ears
You sing
harmony is born

I play
rhythm is shared
You groove
the dance begins

Music has been opening doors in little big ways. In Turin, we played a set to the audience of a mother and daughter. They spoke no English, we speak no Italian. The girl was clapping along to our rhythm and fully present with the music. Afterwards we invited her to approach to pluck the strings of our instruments to see what they were like (mostly by smiling, offering out the instruments, and demonstrating plucking). She shyly and curiously approached with the encouragement of her mother and tested out the strings with her small fingers. The mother thanked us, “Grazie!” and they continued about their day.

Here’s a video from the Parliament building in Genoa and is dedicated to Michelle Hoyt. We have several dedicated videos that will be coming soon as their own separate posts.

We are only
so strong
and so weak
as when we
dream together.

Seven times seven
men could
stand abreast
and cover the
Earth with love,

But just so many
men could
dash the hopes
of nations.

When we strive
for grandeur
we find cages of
bone and
nets of expectation
that might catch
fish if not
for all the
loopholes.

Yet I say,
stand with me,
nod to my dreams
and I will
honor yours
in my words
and my deeds.

We’re finally here in Genoa, Italy! We’ve been attempting to get here since Thursday morning…here’s a brief look at our efforts to get out of the UK and to the Mediterranean.
Wednesday night in London:
Ben: “Baylen, look at these flights to Turin!! 60 pounds a seat! We could get 3 seats to Italy for the cost of one Eurostar ticket to Paris!”
Baylen: “That’s awesome, especially considering that the EuroCup, which we didn’t know was happening, is being hosted in France making everything booked up and extra expensive. I think we should skip over France and come back later in life. Let’s roll a handful of 20-sided dice, each assigned to a different element, to see what the fates say.”
Ben: “Would you look at that, the dice say we should go to Turin, except why is the “spirit” die a 2? Apparently our spirits will be crushed?? Naaahhh. Let’s swing by the airport tomorrow morning to purchase these 60 pound flights and get out of here!”
7:00am Thursday morning at Luton airport outside of London:
Ben: “We would like three tickets on the flight to Turin please, one for me, Baylen, and our friend Felicity the cello.”
Blue Air Staff: “Great, that will be 183 pounds….”
Baylen: “That sounds about right.”
Blue Air Staff: “per seat.”
Ben/Baylen’s Mind: “AAAAAGGGHGHGHGGAAGGGGHGGGGHHHHHGGAGGAAGHH”
Ben/Baylen’s Words: “Thank you, we’ll have to think about that for a moment.”
*Ben and Baylen get a nearby hotel, purchase tickets online at 60 pound price for Friday morning and chill out all day..*
Friday:
Ben: “I’m so glad we are finally on this plane! Genoa, here we come!!”
Baylen: “You’re telling me. Uffdah!”
Felicity the Cello: “……………..”
*Plane lands and we make our way to the train station with only moderate confusion.*
Baylen: “Uh, Ben. Look at the departures board. My Italian isn’t the best, but I think I know what ‘cancellato’ means.”
Ben: *Facepalm!* Let’s get a ticket at the customer service counter to see what is up.
*Waiting, waiting, 90 minutes of waiting.*
Customer Service Staff: “Oh yes, no trains to Genoa, or pretty much anywhere today. There is a national strike until 9pm tonight. You can get a train to Genoa tomorrow.”
Ben/Baylen’s Mind: “AAAAAAAGGGGGGGGHHHHHHHHHHHHHHHHHH!!!!!!!!!!!!”
Ben/Baylen’s Words: “Thank you very much, have a lovely day.”
Baylen: “Well, let’s get a place to stay in Turin and see what this place is all about…”

The serendipity of all this is that, without each unfortunate mistake or mishap, we would have passed right through Turin without a second glance and thereby missed one of our best nights so far this trip!

Turin is an old city and used to be a capital.  The architecture is gorgeous. Every building has countless windows and every window has a balcony. The streets are wide and friendly and the cafes have a stylish but inviting design that made even a couple of smelly vagabonds like ourselves feel welcome.

As we wandered we stumbled suddenly into a magnificent church, complete with golden statues and mural domes. It was lavish but tasteful, with perfect marble. We could tell immediately that the acoustics were phenomenal. We were both thinking the same thing, but Ben was skeptical of our chances. I (Baylen) approached the woman on staff and asked her if she was at all open to the idea of some cello and viola music. After an initial moment of translation shock, she smiled and went to see if she could turn off the feint music piping through the speakers. Soon Wormwood played a few sets under the marvelous arches. Ben also played some solo Bach suites. He is quoted saying, “Bach makes so much sense in a place like this!” The whole experience was a bit surreal. Antonella, the wonderful woman keeping watch on the place, explained that the church was built by the Jesuits in the 16th century. Nothing like 500-year-old acoustics to boost your tone! We are so grateful to Antonella for her generosity. She even offered to host a little concert for us if we wanted to come back in a few days! The takeaway for both of us, is not to assume things. It never hurts to ask! (Unless you’re as Midwestern as us; then it is literally painful to push social boundaries, haha.)

Soon after we dined on cured meats and a bottle of Chianti at a little meat and vino cafe at the heart of the city. The salami and ham, which was served on a wooden board, tasted just as good as we imagined it would. With stomachs full and cheeks flushed, we played music on one of the main thoroughfares of the town. Thousands of people walked by and many really enjoyed our sound. One gentlemen threw a crumpled note into our case that we mistook for garbage, but later realized was 10 Euro! The generosity of the evening was unprecedented.

After a bit, we packed up our cases and followed the tide of faces towards the main piazza and the grand castle. We began hearing fireworks as we approached, and what we saw when we arrived drove home the magic of the city. Thousands of people were gathered on the piazza and down a street for at least a half-kilometer. The sea of people must have been at least eight thousand! Everyone was watching the fireworks on the river, laughing and smiling. We could only guess as  to the cause, but it was certainly a Friday of celebration. We smiled the whole way home.

Did we mention our hostel room had air-conditioning? Yeah, we slept like kings…slightly sunburned kings.