Some uphold
that mirrors
map the world
in honest light

While windows
in the eyes
reveal the visage
vision hides.

What then are
ghosts and
shapes that
resonate in glass

Staring elsewhere
through a film
of self
reflection

Mirrors folly
of the simplest
nature, of
self direction.

To glance and
in an instant
see the world
outside and in,

Makes manifest
the err of
each and every
human sin.

Wisdom in this life
can be explained
discerning a dusty mirror
from a glossy window pane.

Provided I had German language skills and I wasn’t such a country boy, Berlin is a city where I could live. The district we are staying in, courtesy of Ben’s generous friend Maya Markwald, is unassuming and diverse. There are delicious kebab places, hipster coffee houses, affordable organic markets, and vegan ice creameries around every corner. Having Maya to recommend the best versions of everything has proved invaluable. Ben and I are feeling a bit taxed by our wanderings, so having choice establishments picked out for us is a god send. 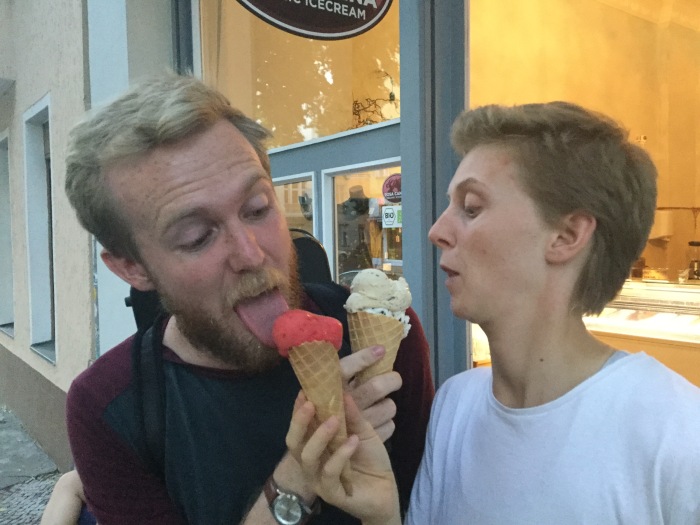 Just the other night Wormwood got to play in Körner Park just a few blocks from our stay. Maya invited her friends and acquaintances to meet for a concert, and a really wonderful crowd of locals turned up for a bit of evening relaxation. We were very flattered by the audience. We realized just as we sat down to play that this was technically Wormwood’s very first independent concert!

In daily routine we’ve spent a few hours here and there wandering around the city. We’ve completely avoided the downtown center and the hub of monuments. We might make a short trip into that region soon, but we’ve learned enough about ourselves to know we won’t last long amidst crowds and manicured shopping streets. We spent one afternoon in a big park south of the city center called Hasenheide. Families and couples stopped to listen as we played beneath a tree. You can enjoy the handstand workout happening in the background of this video, which we’ve dedicated to Kristin Anderson.

Another of our excursions took us even further south. We’d been told that an abandoned airport was open to public use. We had no idea what to expect, but soon we were trudging along dirt paths in beautifully wild sections of land. There were homemade fire pits and haphazard couches strewn throughout the acreage and wonderful public art on ever brick edifice.

Eventually we stumbled through a gate and out onto a giant strip of land that could only be explained by an airplane runway. Except, the grass was mostly prairie and there were groups of people as far as the eye could see, sitting, dancing, barbecuing, kicking a soccer ball – it was an unpolished public space, unprecedented in size. We walked all over and noticed public restrooms in good condition, bike/running paths on air-lift tarmac, and even a sprawling community garden complete with handmade, wooden seating and a canopied stage for concerts. Here was San Francisco in the heart of Germany! Here was repurposed paradise! Combine that with the rich history of the Tempelhofer Feld as public parade, military base, a U.S. relief drop point, and you have yourself a recycled, re-imagined, activist-empowering hippy wonderland.

Here’s the funny part. Ben and I were dragging so hard that day we visited Tempelhofer that I felt like I was back in Montessori Teacher training. We could barely muster the enthusiasm to lift one leg in front of the other, let alone revel outwardly in the impressive nature of the park. That said, we did record a video, and I’ve dedicated it to my good friend Cristina Celis. See if you can spot the moments when my (and Ben’s) train of thought gets derailed and we lose the ability to speak words…oh boy. Needless to say, that day included a generous nap!
I want to say an extra word of thanks to Cristina for supporting my travels. She encouraged me to “get out of my country” from the moment we met, and I’m grateful for that. Abrazos, Cristina.

One thought on “Wonderland”